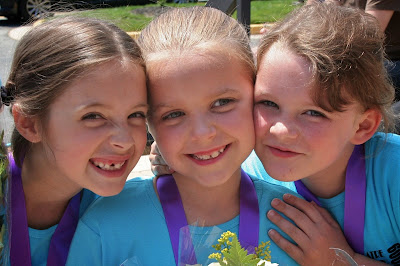 Hannah and two of her best buddies had their ballet recital yesterday. The make-up, the perfect ballet bun, the costumes, the stage, little brothers watching with binoculars, roses from us ... Hannah loved every second of it. Simply adorable!
1 comment: 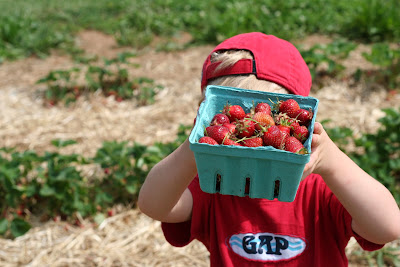 Hannah started talking a few months ago about wanting to study American History next year. My planner self wanted to say "Sorry, we'll be studying the middle ages. We're going in order here." But I put the plan aside and decided to do a little research for my American Girl/Little House on the Prairie loving daughter. 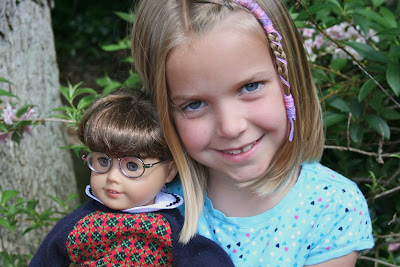 (We won't make it to the Molly years, but the Felicity books are her favorites.)
After looking around, I've settled on an Early American History study for next year. A Charlotte Mason devoted friend pointed me to Beautiful Feet Books and I was able to visit their booth at the Pennsylvania homeschool convention last month. We will be using the Early American History Study Guide (for Primary Grades) from their History through Literature series. I am also going to incorporate a study of the states using part of My Father's World, "Adventures" curriculum. I am very excited about taking this little history detour. Hannah is thrilled and it'll be a good fit for Will in Kindergarten, too.
Our literature approach will include the following:
(Beautiful Feet Books sells this in a pack - "Lowest Price Guarantee")
America's Providential History, Belies and McDowell
Leif the Lucky, D'Aulaire
Columbus, D'Aulaire
Pocahontas, D'Aulaire
Jamestown, New World Adventure, Knight
Squanto, Friend of the Pilgrims, Bulla
Stories of the Pilgrims, Pumphrey
The Pilgrims of Plimouth Colony, Sewall
Five Kernels of Corn, (American History in Verse) Stevenson
Benjamin Franklin, D'Aulaire
A More Perfect Union, Mastro
George Washington, D'Aulaire
Boys and Girls of Colonial Days, Bailey
Winter at Valley Forge, Knight
George Washington's Breakfast, Fritz
The Courage of Sarah Noble, Cary
The Matchlock Gun, Edmonds
Abraham Lincoln, D'Aulaire
Meet Abraham Lincoln, Cary
Buffalo Bill, D'Aulaire
Your Story Hour CDs
And the field trip possibilities... oh my! I'm compiling a list. Jamestown is at the top. I'm exciting about taking full advantage of all DC and the surrounding area has to offer.
4 comments: