My desire is to instill good habits of order, cleanliness, and regularity in my children. I also want to keep our home clean and orderly without dedicating an entire day each week to cleaning. With those things in mind, I came up with this chore chart for the kids. 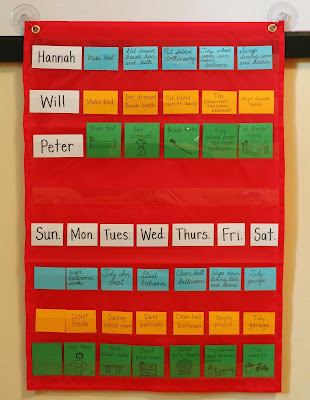 Over the summer, when Target's dollar section was full of school/teacher supplies, I picked up this "classroom card scheduler," though I wasn't sure what I would do with it at the time. So glad I did.

Here is something similar, though it's not $1. 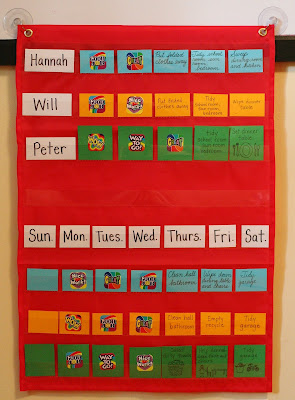 As the kids complete their jobs, they flip over that card. (Hannah's cards are in cursive. Peter's have pictures.) Some days we all forget about the chart, as we have created a good rhythm to our days and each of them does their part out of habit.

(We also have some days that nothing gets done.)

I keep my own daily chore list/to do list on my clipboard (along with my grocery list, menu plan, school lesson plans).

brush hair and teeth - Everyone

put folded clothes away – Hannah & Will


Kendra at Preschoolers and Peace has a lot of great resources and downloadable charts. (And she has many more kids to organize in her home!) I adapted her Daily Checklist to also include my weekly to do list.